A Look at the Macintosh’s Impact on Technology and Culture 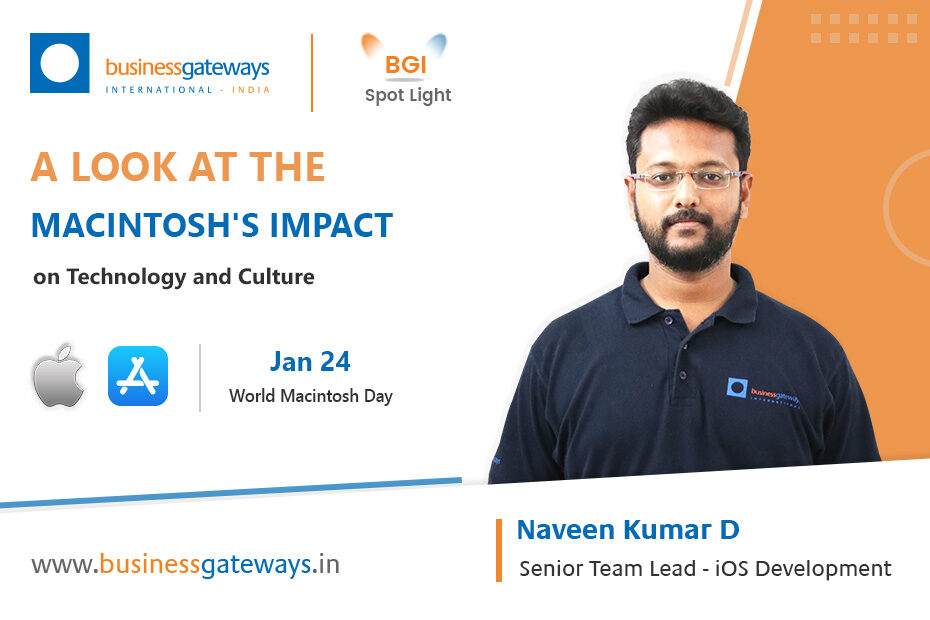 24January is celebrated as “Macintosh Computer Day,” as it marks the anniversary of the introduction of the original Macintosh computer, which was on 24 January 1984. On this day in 1984, Apple Inc. introduced the world to the Macintosh personal computer, forever changing the way we interact with technology. From the 1980s till 2023, we are briefly looking into how this single invention has single-handedly changed the course of technological history. To guide us through this, we have Naveen Kumar D, Senior Team Lead – iOS Development, BGI India.

Before the Macintosh, only hobbyists and businesses had personal computers. They were difficult to use and required a deep understanding of text-based commands. But the Macintosh changed all that. With its Graphical User Interface (GUI) and iconic mouse, the Macintosh made it easy for anyone to use a computer.

The Macintosh was not only a technological breakthrough, but a cultural one. Marketed to a wide audience, the Macintosh was an instant success. Apple’s “1984” commercial, which aired during the Super Bowl, introduced the Macintosh to millions of viewers and set the stage for computer’s widespread adoption.

The Macintosh’s influence can still be seen today. The GUI and mouse-based interface that the Macintosh popularized are now standard on all personal computers, and the Macintosh’s design aesthetic has been borrowed by countless other technology companies. Many of the apps and programs we use today have their roots in Macintosh software.

The Macintosh’s impact extends beyond technology. The Macintosh was a symbol of creativity and individuality, and it attracted a loyal following among Artists, Designers, and other creative Professionals. The Macintosh became a symbol of counterculture, and was embraced by those who wanted to challenge the status quo.

The Macintosh also significantly benefitted the developers by providing them with a powerful and user-friendly platform for creating software. The Macintosh introduced a number of development tools, such as Xcode, Create ML etc,. Xcode is widely used by iOS and macOS developers and offers a range of features such as a visual editor and debugging tools. Create ML is a Machine Learning framework built into Xcode and available on macOS. It provides a simple, intuitive interface for training and deploying machine learning models.

Today, we celebrate the Macintosh and its lasting impact on the world. The Macintosh’s revolutionary design and interface made it possible for people of all ages and backgrounds to use computers, paving the way for the personal computing revolution we continue to experience today.